The first thing I discovered about Jeremy Edwards is that he has a wicked sense of humor. The second thing I learned was that his talent with crafting puns and double entendres is but one of his gifts with words. Winning the most creative award for his story title, "Gildi and the Unwieldy, Ineffectual Committee of Bears," Jeremy has written a very different kind of Goldilocks story.


What inspired you to retell this particular fairy tale?


How long have you been writing erotica?

I began writing some erotica in 1995; but for the most part I didn't disseminate it, and I only wrote in the genre very occasionally. It was a full decade later that I began writing erotica regularly, and for publication.

Typically, my stories first go through a "preproduction" phase where I'm making notes as things occur to me--little bits of dialogue or narrative for a story that I'm planning on writing, but haven't yet focused on. Often the first paragraph or so of the story will be drafted in this phase. Then, when I sit down to work on the story in earnest, I tend to write in chunks, not necessarily drafting things in order. As I add content, I'm continually looking at what I have, and revising as I go along to polish things and make sure all the chunks transition well into each other.

So by the time I have a complete draft, I've already done a lot of revising. At that point I go through one or two more times to polish. Then I print the manuscript out and go through with a purple pen. This is a "fine-tooth comb" phase, where I try to catch anything that's awkward, and also mark any words whose spelling or precise meaning I think I'd better double check. (It's also where I tend to replace character names with pronouns wherever I've repeated a character name unnecessarily.) Then, of course, I take the purple-pen mark-up and go back to the digital file, to deal with all this.

Finally, I run a "concordance" program over the file to generate a list of words contained in the story, in descending frequency order. I scan this for words that I may have overused, finding alternative vocabulary where it's called for.

What do you enjoy reading? Favorite authors? Favorite genres? Recommendations?

Outside of erotica (which I read a lot of!), my reading tastes run to comic novels (think P. G. Wodehouse and E. F. Benson), humor essays (think Robert Benchley and young Woody Allen), whimsical children's books, and stage farces. Much of the literature I enjoy most dates back several decades, or even a century.


What’s next for you? Upcoming publications and current projects?

Thanks for asking! I have an erotic-story collection coming out soon: Spark My Moment, an e-book from Xcite (which may also appear in print down the road). Meanwhile, my erotocomedic novel Rock My Socks Off (also from Xcite, in print and e), which was released in the UK earlier this year, is scheduled for U.S. release in the fall.
Posted by Kristina Wright at 11:09 AM 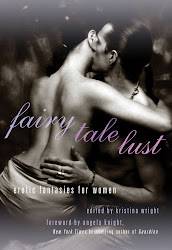 Find me at: Kristina Wright: Musings of An Insomniac Writer.